My Feelings on Recent Events 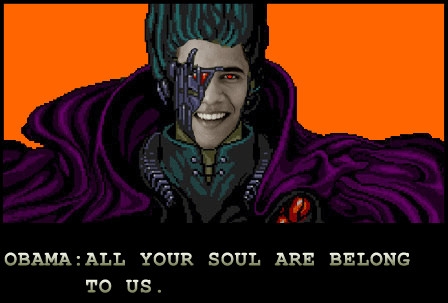 Tags: Politics
Posted in Off-Topic | Comments Off on My Feelings on Recent Events

How Little Voters Knew About Issues

Apparently there are people that were not informed on the issues when they voted his almighty into office.

Tags: Obama, Politics, Voters
Posted in Off-Topic | Comments Off on How Little Voters Knew About Issues

Thanks Jason for this audio clip. I went to YouTube and was able to locate the full (or most of the) speech President Benson gave. Pay close attention from 2:00 on. Interesting comparison of how this is happening in our day in age. Granted, this was probably given at the height of the Cold War, nonetheless, it has truth as we watch our nation fold to socialist ideas and policies.

Its 1:25am. I am tired of listening, watching and reading about today’s protest regarding preparation 8. I have many feelings about it and have little time to compose a meaningful and eloquent post about it. So, I will let the Roman Catholic Diocese of Sacramento do it for me, I like their approach anyhow.

And from the horses mouth…

Another Obama fallacy, the claim that his tax plan increase on incomes of $250,000 or more is only on those that “individually” earn over $250,000. This small business owner has explained how this will affect his business. Yes, it affects you, Utahns. Even if you do not personally take in $250,000. Utah has around 236,000 small businesses. This means, of those 236,000, I would imagine most if not all bring in more than $250,000. All of you feeling Obama is on your side, he is not. He is twisting the truth.

Obama’s Fallacy on the Role of Government

Tags: McCain, Obama Fallacy, Opinion, Politics
Posted in Off-Topic | Comments Off on Obama’s Fallacy on the Role of Government

As with any ol’ political campaign, there always has to be some cracker/script kiddie advocacy/special interest group breaking the law to push their agenda.

Tags: Politics, Sarah Palin, Security, Yahoo! E-mail
Posted in Off-Topic | Comments Off on Is Nothing Sacred!!!