So I was sitting in a meeting here at work when the standard Apple update screen popped up. Good thing I actually read what the update was this time. It appears Applesoft is trying to push their Safari web browser on me through QuickTime updates! Give me a break!!!. The Apple community has been so critical of Microsoft, now I can understand how the hypocritical bigotry has no bounds with these guys. 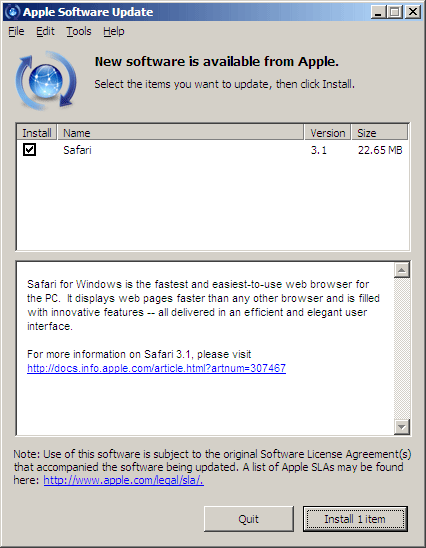 Note to self: Type of Web Links

A note to myself on the 12 types of web links (for SEO/SEM).

Tags: Links, SEO
Posted in Off-Topic | Comments Off on Note to self: Type of Web Links

I have been using Google Docs in a variety of ways since its release. About a month or so ago, they released a whole slew of new features, one of which was Google Forms. I finally had the chance to sit down and run through the setup. It is rather simple and pretty functional for basic users needing to collect form data on the web.

Here is a brief overview:

END_OF_DOCUMENT_TOKEN_TO_BE_REPLACED

The other day I took a picture of a sign posted at a building near where I work. I was returning from lunch when I noticed the “undry paint” sign. Someone really needs to fire their marketing department. 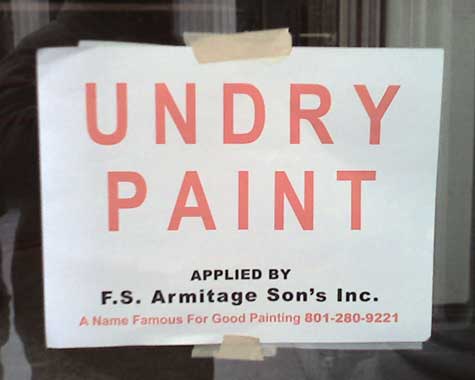 I have been using AceProject project management system for years. First at LANDesk, and now at McCann Erickson. Though it is a great tool for managing projects and tasks, it’s user management system lacks a vital feature, cascade delete user. That is, delete the user along with all it’s assigned tasks, projects etc.

So after having make various request for this “feature” I have written my own sequel procedure to handle the re-assignment and deletion of user accounts. In a nutshell, this procedure will re-assign all relevant data to a new user account, then delete the actual user record from the database. This then allows you to actually take advantage of your licenses (in our case 50 for now.)

Hopefully this helps someone else that is hosting this application as it did me.

I have finally done it! Well, somewhat done it anyway.

Ever since we moved into Daybreak we have had the misfortune of experiencing the foul stench that is (we believe) the Trans Jordan Cities Landfill. As we live directly down wind from the facility, its on a monthly if not weekly cycle that around 6 or 7:00pm the stench permeates the air.

It was the first or second month of having to cover my mouth and nose with my coat sleeve that I decided I would someday build a web application that would allow visitors to submit rankings of the intensity of the stench in the air at any hour of the day. It was not until recently (past few months) that I decided enough was enough. So I came up with a snazzy name, bought the domain, and built the application on a fairly new technology (for me that is), Windows Live Virtual Earth.

Granted this is the .01 release, but at least I finally have something done and tracking submissions. I would eventually like to customize by adding user profiles, custom reports, widgets, etc. But for now, what is there will suffice my ego.

* DNS was just recently setup, so you may or may not be able to access the site

I ran across this little morsel today while Googleing more Ektron issues. Yahoo!, Google, Live…how many technologies am I going to need to know to stay afloat in this industry?!

One of my many items of never ending things-to-do has been at the request of my son, Jaryn, to produce a video “short” of him as a Jedi. Well, after hours of rotoscoping, PhotoShop editing, and more rotoscoping, to get the right light saber effects, I was able to put together this mildly feeble video short for my kids.

I used VideoLAN to capture clips and screen shots off of the original movie, then Pinnacle Studio Ultimate to compile the video. I was able to find light saber sound effects online, but I compiled the audio for the introduction using GoldWave. I also used Nero Burning ROM to create a VCD to be able to show it on our “big screen” T.V.